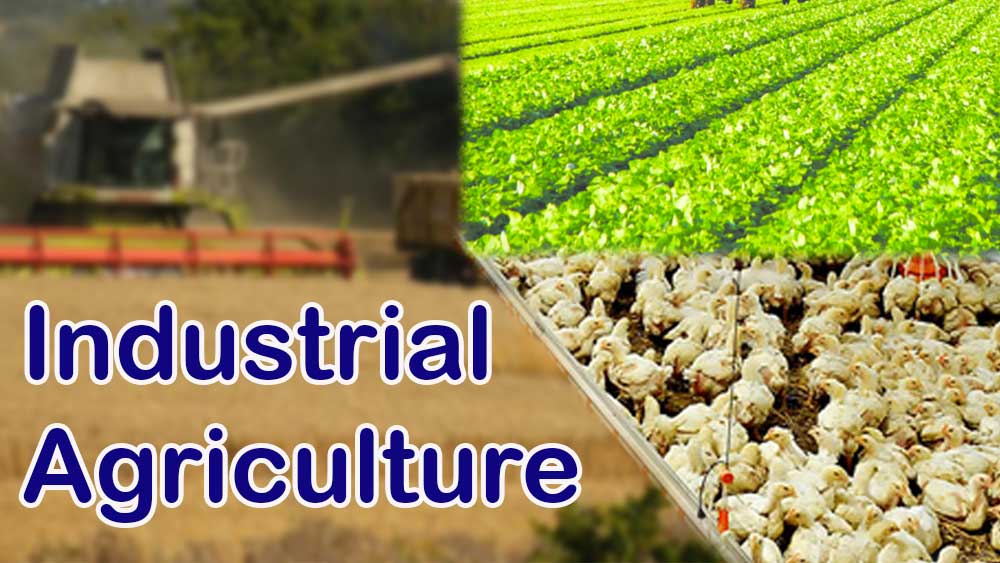 Farming or Agriculture is the key phenomena in making food for the living beings. Farming subjected to so many changes in order to meet the rising food demand. There are different methods undertaken by the farmers when producing food. Among them now a days the Industrial Agriculture plays a major role and through this the farmers can produce larger proportion of the food need globally.

The large industrialized farms raising animals for food called as concentrated animal feed operations or factory farm. These farms have large number of live animals and not keep for more than 45 days per year. They are not allowing to graze. Large concentrated animal feed operations have at least 700dairy cows, 1000 beef cattle, 82000 egg laying hens or 2500 large pigs.

Huge environmental pollution occurs due to concentrated animal feed operations. Not only that but also it violates animal welfare. The cages which rare egg laying hens called battery cages are very small and crowded. So, birds can’t turn or stand up within those cages. This is a huge problem that should speak worldwide.

People have modified plants for thousands of years ago. But they did it in an old way called selection. As an example, ancient people grew fruit plants by selecting sweetest one.

Modern genetic modifications are doing in laboratories. In here, scientists select desired traits (like resistant to drought or heat) by identifying candidate genes. Researchers use fungus, animal or bacterium to implant a gene. So, gene is not coming from the plant. Using agrobacteria is the more sophisticated approach.

Monoculture is the planting of same crop in same land year after year. This practice is very bad for the health of soil because it depletes soil nutrients. Then farmer compel to apply synthetic fertilizers in large amounts and it also cause degrade of soil health in long term. Rapid erosion, pest problems are also happening due to the monoculture. The same plant in all over the land invites pests to their favorite food. Then also again farmers apply pesticides and pollute the soil.

At present, researchers found that industrial agriculture is not the only way to increase productivity from less land. There are many other options to do for that without spoiling the environment.

Regenerative farmers improve soil health and diverse crop rotations and reduce the use of fertilizers and pesticides. Low confinement system of producing animals benefit to the livestock well-being and health and also to the environment. Also, can reduce the need of massive corn farms and greenhouse gas emission through unconfined animal graze. Not only that but also manure management is improving through this because grazing animals remove their manure on grazing land and it improves soil health. Then leaching animal waste to drinking water reduces.

Now a days, organic agriculture enormously expanded. There is a huge increment of number of certifies organic farms due to the demand of those products. Rebuilding better policies to promote these techniques, increasing the researches to produce laboratory grown meat to reduce amount of land used for livestock, increasing researches on crop rotation techniques, introducing crop insurance programs are some methods to increase the world-wide agriculture production without much harm to the environment.